Every strong brand has a strong history - here is ours. 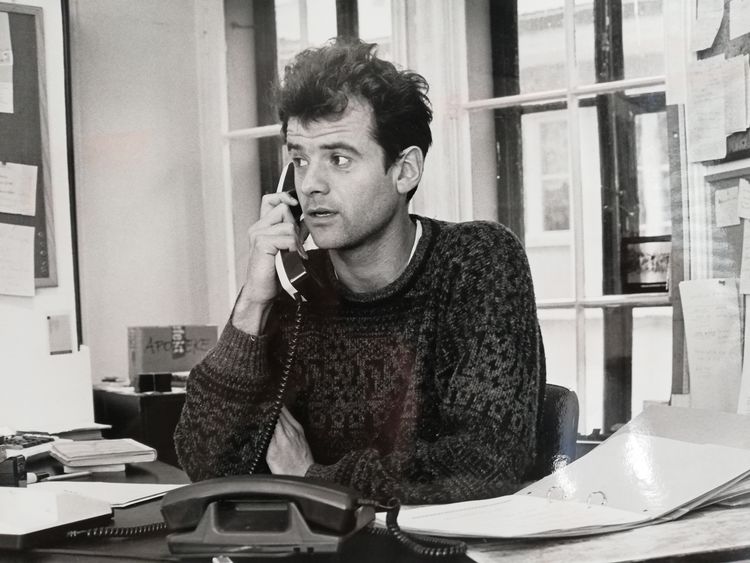 It all started in Vienna

The Suedwind bookshop in Vienna was delivering its orders to the customers by car until 1986. That was, until the moment when a 25-year-old Christoph Masoner came to do his national service at Suedwind. This enthusiastic cyclist had an idea to deliver books on two wheels instead of four. The managing director took a lot of persuading. Finally, a success – Christoph Masoner was given permission to try and deliver the books in an environmentally-friendly way. Shortly afterwards, veloce, the first climate-neutral transport company in Austria, was born. 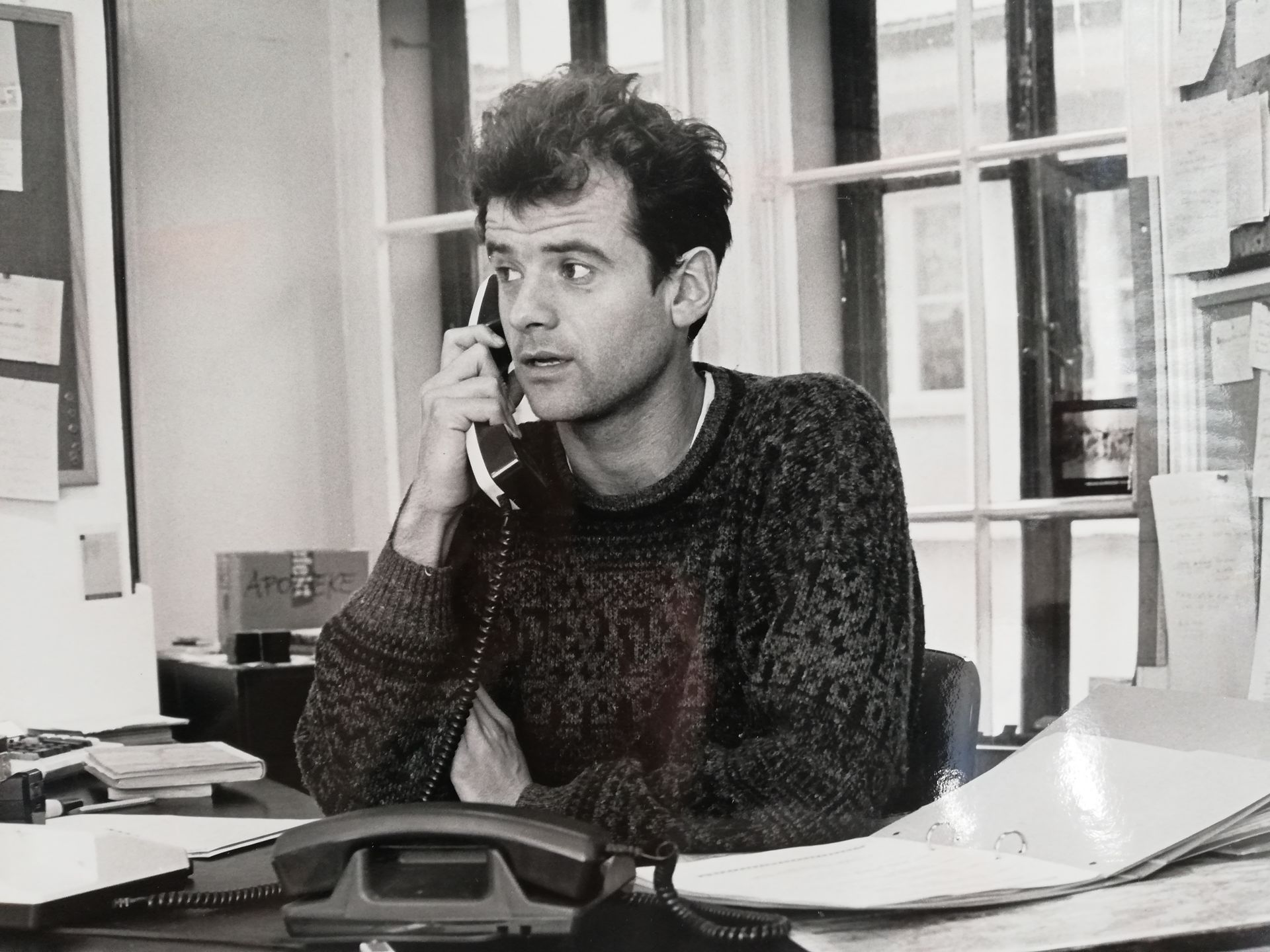 Over 800 kilometres west of the Austrian capital, something similar was happening: Dutchman Michiel van Essen founds Velokurier Lucerne, Switzerland's first bicycle courier, in 1988. The Lozaerner Stadtblatt writes on 31 August 1988: "They are fast, on the move in all weathers, never hindered by traffic jams, familiar with the area, discreet, inexpensive, quiet and environmentally friendly.

A jazz fan Christoph Masoner travelled from Vienna to attend a music festival at Willisau. The festival visit turned into something more permanent and Masoner joined the Velokurier Luzern. His experience, gained when establishing a city bike courier in Vienna, was very much in demand here. It did not take long before he made it to the management of Velokurier Lucerne.

Medical labs and graphic design agencies were enthusiastic adopters of the bicycle courier right from the start. Other customers took a lot more persuading, and the athletic employees were often mocked. But it worked. Other customers also admitted that the bicycle was the best means of transport in the city. 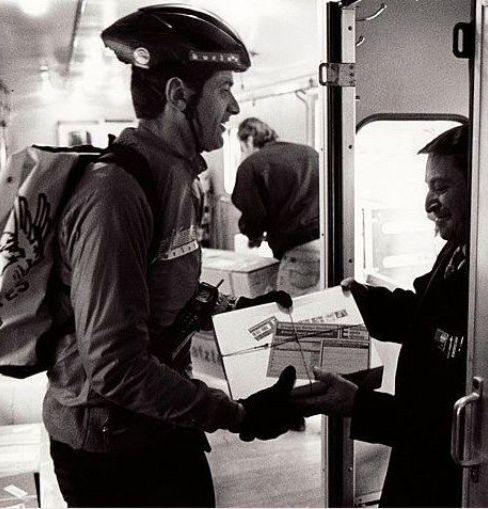 After Lucerne, bike couriers expanded to Bern, Basel, Thun and Zurich.  Ever since, fast and environmentally-friendly couriers have become an integral part of the cityscape. In order to strengthen the young industry sector and to embrace the synergies, the Association of Swiss Bike Couriers was founded in 1990, with Christoph Masoner as the founding member and its first president.

The local bike couriers were familiar with the area, unrivalled for the speed of delivery. However, they were unable to accept national deliveries for their customers. How to deliver parcels directly and in an environmentally-friendly way between cities? Naturally, by train. The idea was born, and in May 1990 it came to pass: Five bike couriers linked five cities under the name of “Bike Courier Cities Service”. 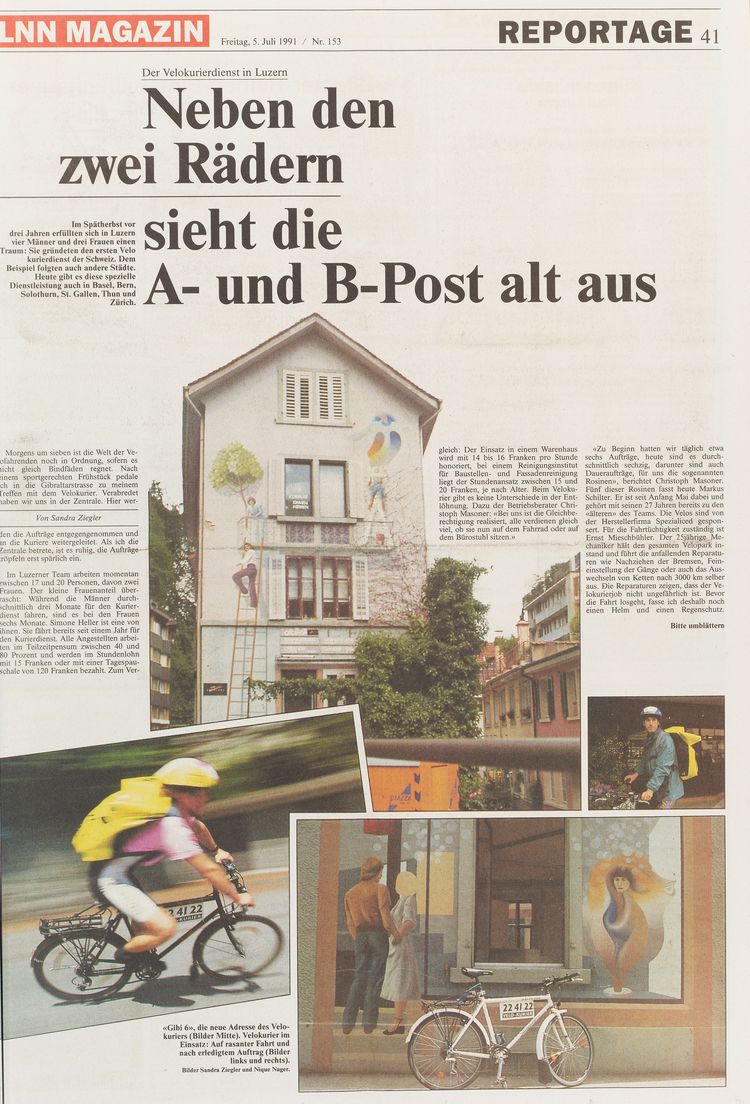 To start with, the process was slow and met with a lack of understanding at the post office. The couriers would collect express deliveries from the customers, pay an express surcharge at the post office and take the parcel back with them instead of handing it over at the counter. Then they would cycle to the station and deposit the parcel in the baggage car of the next train. The parcels were only accepted because they were stamped with the post office express surcharge. The couriers at the destination location would be informed by phone where the parcel was to be found on the train and where to deliver it to – a lot of work for the couriers.

This is how the bike couriers came to be among the first to successfully challenge the Swiss postal monopoly – no one could deliver faster and more sustainably. In 1996, Christoph Masoner signed the first contract with the Swiss Federal Railways SBB. From now on, trained and registered bicycle couriers were able to get parcels on and off the trains without having to pay a postal surcharge in advance. 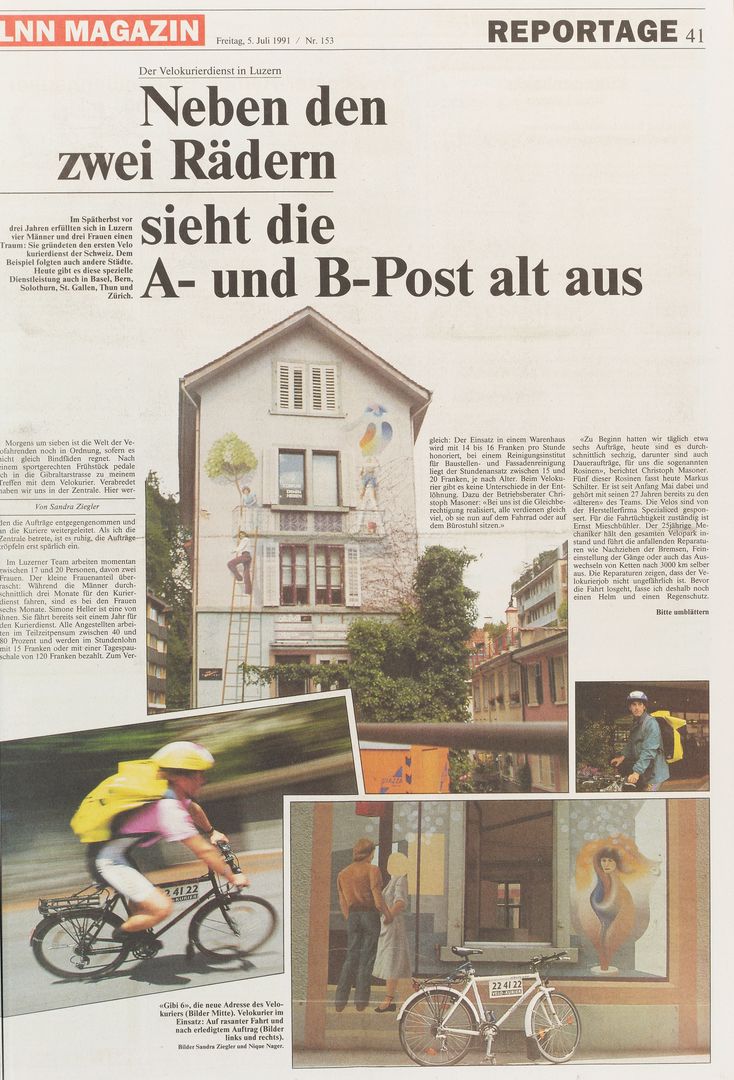 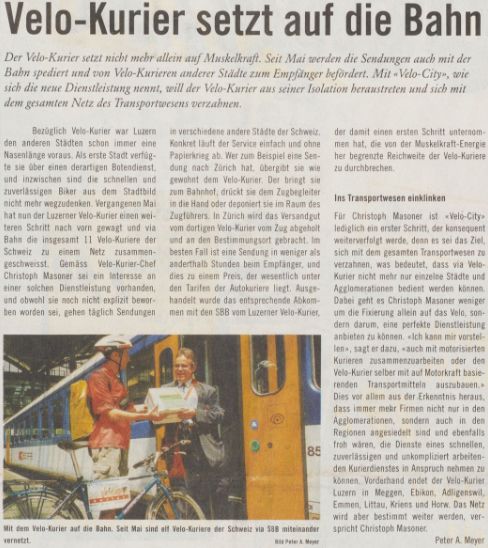 The network of courier companies is growing

National express deliveries were popular with customers and bike couriers – in 1996, eleven Swiss bike couriers were already linked to the railway. The offer went under the name of "Velo-City". Luzerner Woche wrote on 30 July 1996 that the new service would enable the bike courier to step out of her niche and join the entire transport network. In an interview with the newspaper, Christoph Masoner explained that Velo-City is a first step and that it is not just about focusing on the cycling, but about providing a perfect service to its customers. Motorised couriers are to offer customers in remote regions a fast, reliable and uncomplicated courier service. 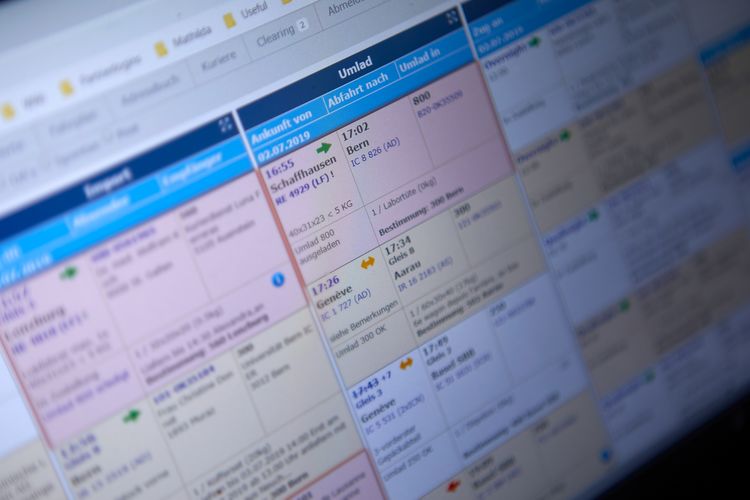 The first national IT platform for courier companies

In the early days, the couriers used to rely on fax and telephone. In 1998 Christoph Masoner created a specification profile for logistics software which would handle all national deliveries. In addition to the physical parcels, the necessary data must also be transmitted quickly and securely using centralised software. 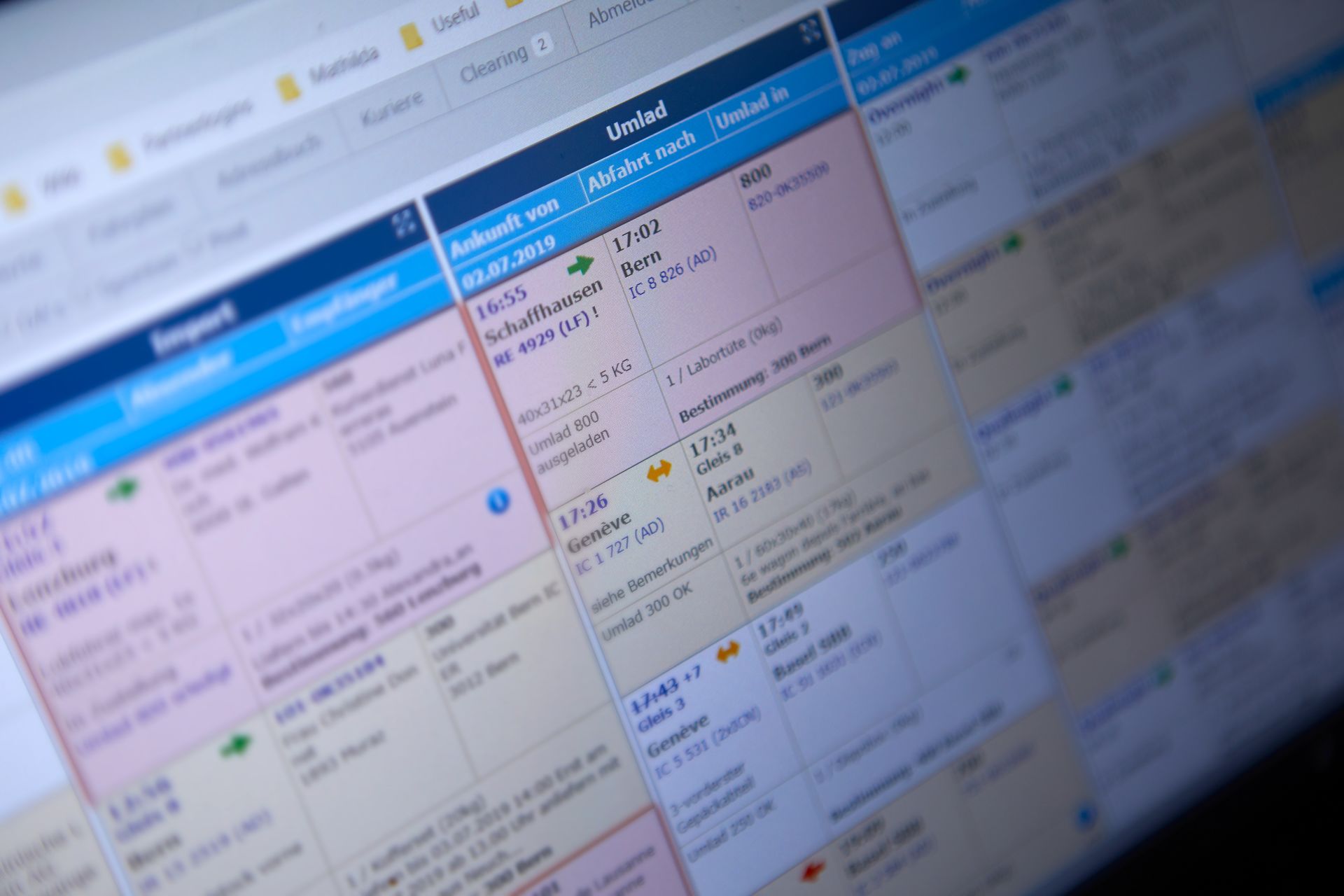 swissconnect GmbH was founded by Christoph Masoner on 29 March 1999 as a spin-off of Velokuriers Luzern. The service formerly known as "City-Courier" was now advertised under the name swissconnect. In addition to the city bike couriers, taxi couriers are also part of the network in remote regions. By that time, the swissconnect partner network included 30 courier companies throughout the country. The first company-owned logistics software was launched in 2001. Since then, every parcel has been processed centrally.

In the same year, the GmbH became a public limited company and SBB was joined by other railway companies such as BLS and RhB. The network continued to grow and consolidate. Separate courier companies were brought closer to their customers. This meant shorter response times and even faster service. In order to continue to guarantee the highest quality, swissconnect became ISO 9001 certified in 2009. 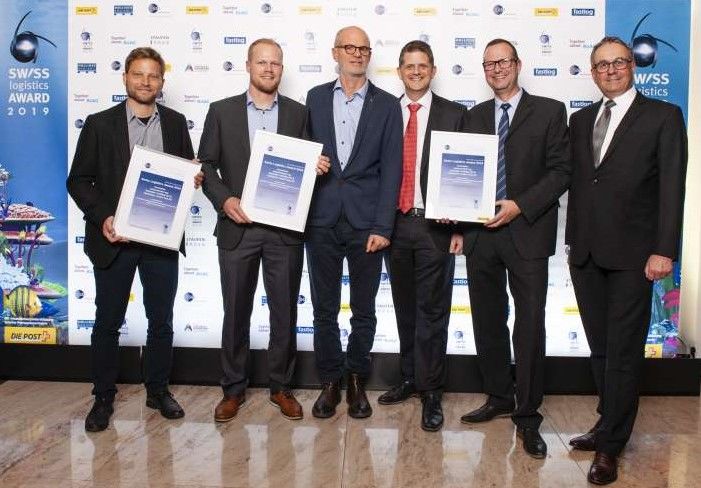 The number of express deliveries transported has grown continuously since the company was founded in 1999. In 2018, the swissconnect network transported over 80,000 express deliveries and saved tons of CO2 with its unique worldwide transport system, which uses a combination of the most environmentally-friendly means of transport available. It included 80 partner companies, employing 500 bicycle couriers, 200 taxi couriers and 10 rail contract partners. 15 employees in Lucerne used software support to coordinate each order and were in close contact with customers and partner companies. A clever combination of low-emission transportation is unique, making swissconnect the fastest and most sustainable courier service in Switzerland. The vision of providing customers with the right means of transport at the right time and in the right place has remained unchanged since 1999.

Stability, quick decision-making routes and personal relationships with customers and partner companies are the hallmarks of swissconnect ag. The company has always been and still remains independent and belongs to 23 different shareholders, who are also partner companies.

We are proud of our long history and the know-how we have built up in sustainable express logistics. Would you like to be part of it? 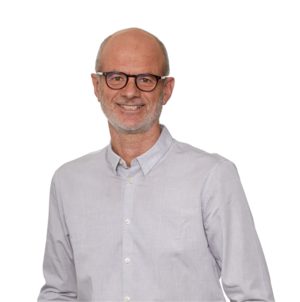 Do you have questions?

Whether on the telephone, via e-mail or a visit in person – we’re here for you.

swissconnect's business model has focused on a sustainable approach since the company was founded in 1999.

Renowned companies from various industries have entrusted their express logistics to swissconnect ag for many years.

Express logistics is a matter of trust. Get to know swissconnect ag's employees personally.